Samsung Galaxy M31 will launch on February 25. This information has recently emerged from the company’s website. This phone will have 64 megapixel camera. There will be four cameras in the rectangular camera module on the back of the phone. There will be LED flash. The gradient finish was seen on the back of the phone. According to the company’s website, the Samsung Galaxy M31 will be launched on 25 February 2020 at 12 noon.

The South Korean company has already released various specifications for this phone on the company’s website. Galaxy M31 has Full HD + Super AMOLED display. This phone will have 64 megapixel main camera. The fingerprint sensor will be behind the of this phone.

The company’s website also revealed that the Samsung Galaxy M31 has a 6,000 mAh battery. Samsung is launching a new phone in India to directly challenge the Redmi Note 8 Pro and Realme 5 Pro.

Various reports recently revealed that the company’s One UI 2.0 skin will run on the Android 10 operating system on the Galaxy M31. Inside the phone will be the Exynos 9611 chipset. The phone will be available in 4GB RAM + 64GB storage and 6GB RAM + 128GB storage.

Apart from M31, Galaxy M11 and Galaxy M21 will be launched soon in M series. 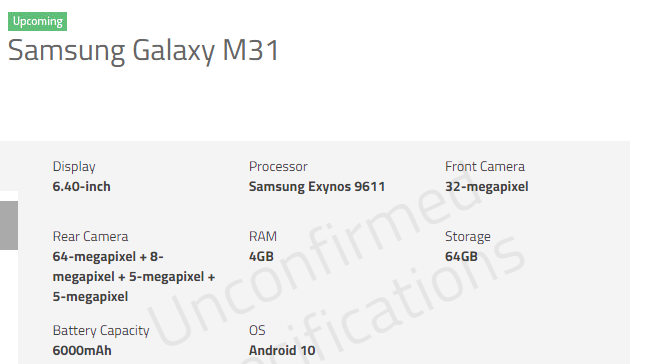 Best Smartphones Under Rs 15,000 In India

Best Smartphones of 2019 With Price